Born in Lima, Peru and based in NYC, Maria Chávez is best known as an abstract turntablist, sound artist and DJ. Coincidence, chance & failures are themes that unite her book objects, sound sculptures, installations & other works with her improvised solo turntable performance practice. Her latest album, “Maria Chavez PLAYS Stefan Goldmann’s Ghost hemiola” was nominated for a Preis der Deutschen Schallplattenkritik in Jan. of 2020.

Currently, Maria is on the cover of the textbook on the History of Experimental & Electronic Music by Routledge Publishing, is a David Tudor and Robert Rauschenberg Arts Fellow and a Research Fellow for Goldsmith's Sound Practice Research Department (2015-17). Her large scale sound & multi-media installations along with other works have been shown at the Getty Museum, the JUDD Foundation, Documenta 14 in Kassel, Germanyand HeK (Haus der elektronischen Künste Basel) amongst many other institutions around the world. She is currently an artist in residence with EMPAC (The Curtis R. Priem Experimental Media and Performing Arts Center) until 2022 and is on a medical sabbatical due to receiving brain surgery in Feb. 2019. She will return to performing for the public in 2022-23. She appreciates everyone's patience and compassion during this difficult time

“Live At Jewel’s Catch One” is a live collaboration between renowned abstract turntablist, and sound sculptor Maria Chavez and avant-garde guitarist Lucas Gorham. This collaboration afforded us with a unique opportunity to work with both artists and release a sonically and conceptually beautiful sound work. Both Chavez and Gorham are known

“Live At Jewel’s Catch One” is a live collaboration between renowned abstract turntablist, and sound sculptor Maria Chavez and avant-garde guitarist Lucas Gorham. This collaboration afforded us with a unique opportunity to work with both artists and release a sonically and conceptually beautiful sound work. Both Chavez and Gorham are known internationally for their acute investigations into improvisational sound, the complexities of chance improvisation and free-jazz inspired compositional methods, unifying the breath of all sounds big and small, and seemingly the very essence of sound herself.

Gorham creates a landscape of cauchopanous peaks and cavernous valleys through string-based sonic articulations as Chavez’s cut up, broken loops sew a city of beauty and acceptance atop the rigid rumblings of Gorham. Despite not being able to hear each other in the original performance due to a monitoring issue (there were none) Chavez eloquently plays off the landscape, using her methods of change and trust in her collaborator, drawing a complex web of cracking architecture and shifting temporal spaces. Chavez creates looping shards, created with such nuance and intimacy they present themselves like mysterious gifts to the listener, magnifying both the richness and impermanence of sound. Through her own decades-long investigation of all aspects of the turntable as both instrument and vessel for experimentation, Chavez has repurposed the mechanics and all of its idiosyncrasies as her own once again, playing off Gorham’s abstract lap-steel guitar work perfectly. This collaboration is rooted in trust, chance, and the intricacies of sound and space themselves. A process, at least in Chavez’s work, usually reserved for live performance only, we are more than honored to be able to present this live document to those who couldn't attend the original performance.

“In the late 1990s/early 2000s in Houston, TX, an experimental music workshop for young people helped to forge a lifelong friendship. Focused on the improvisation of sound and the development of an individual approach to it, this weekly workshop also helped to shape the creative course of both of these artists for the rest of their lives. Almost two decades later, on April 28, 2018, this friendship culminated in a long-awaited performance at Jewel’s Catch One, a night club in Los Angeles. Maria Chavez (turntable) and Lucas Gorham (lap steel guitar) give their first live performance together here. Due to an error that must have been a lapse in production logistics, the sound person working that night neglected to provide monitors, and neither could hear each other nor themselves for the entire duration of the performance.

Gorham managed to bring a mobile recording set-up and captured the result, which pleased both artists.” 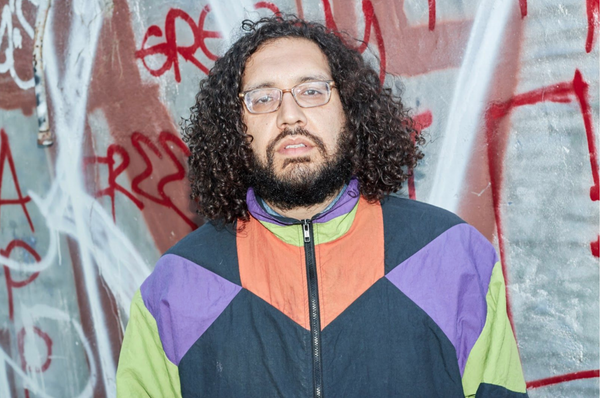 Lucas Andres Gorham is a multidisciplinary artist, musician and educator from Houston, TX. Early on, he forged a diverse musical background based in improvisation. Much of it began in a small but potent community of experimental musicians — mostly high school students in a “jazz improv” class led by an outgoing and experimental trombonist and educator named David Dove. At an ancient elementary school-turned-community center called MECA, the classes were highly abstract, focusing on techniques of improvisation created by greats like electronic music pioneer and master improviser Pauline Oliveros. At 18, Gorham won a scholarship to attend the Deep Listening Retreat, a week-long event held by Oliveros and co. that focused on her teachings, philosophies, compositional techniques, meditations and improvisational practices. Through his attendance, he built a lifelong relationship with Pauline and her family and has played several of her pieces with different ensembles throughout the years. As Gorham continued into adulthood, his friendship and musical work with David Dove developed further, and through a collaboration with Screwed Up Records and Houston artist Ayanna McCloud and her then-operational art gallery labotanica, they released an abstract tribute to legendary Houston icon DJ Screw on an album named Screwed Anthologies. Gorham and Dove’s duo played a three-week tour across the east coast upon its release in 2010.

In two other worlds, Gorham lived two concurrent but completely different musical stories: as a professional RnB and gospel musician and as a rocker in different raucous underground local bands. Over a six-year period, he performed in several different churches in the Houston area. Known as “the nerdy Latino dude,” he played in young, mostly black churches around town, upstarts in the local scene. While he was playing churches on Sunday morning, he was also playing at venues, bars and house parties on Saturday night in different punk bands, party bands, noise rock outfits and the like.

In many ways, the lap steel guitar served as a point of singularity between his three different musical lives. It became his focus after being wowed by watching a gospel music documentary called Sacred Steel, which follows the House of God, Keith Dominion (an American Christian sect) and their explanation of the steel guitar and its presence in their ministry. The ecstatic music in the movie was deeply moving for Gorham and he became obsessed. A dear friend gifted him a broken lap steel guitar which he repaired and practiced continuously, even taking it on his travels in a cross-country train ride to California and back. Taking his newly developed techniques, Gorham started an eclectic soul-rock band called Grandfather Child, a veritable super group of heavy-hitting Houston musicians that quickly rose to local prominence and released an album on New West Records in 2012. He also recorded and released three albums of experimental/improv music that employs the steel guitar independently, all of which can be found on his bandcamp.

A year or so after his band’s end, Gorham moved to Los Angeles, where he is currently based. There, he works as an educator, DJ, composer, producer, beat maker and session musician. His current projects involve creating and teaching sound art and designing installations that incorporate video art, animation and music. The themes he explores are city life, migration, the distinction between nature and civilization, solitude in crowded environments, spirituality, the Tarot, his identity (Chicano, Tejano), the abolition of the prison system and walking

Featured in LookSee, The Wire, Ravelin & The Creative Independent

"Lucas Gorham Changes His tune, And His Band" - Chron