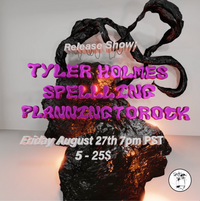 TYLER HOLMES (They/Them) is a singer-songwriter, visual and performance artist who uses music as therapeutic device. Coming from a turbulent and traumatic ‘cult-like’ early life, Holmes has spent a lifetime crafting their own Black, Queer narrative by pushing the limits of their imagination. In a constant state of reinvention they make a mixtape of every moment, from song to song the audience is getting a wholly different animal. Holmes has a chameleonic singing style that ranges from Folk inflected whispers, to morose Goth wails, to Gospel bellows. Envisioning themself as the imaginary child of Björk and Tricky, Tyler Holmes is on an isthmus between Trip Hop and Experimental Pop. They use a surrealist lens on a wide variety of genres, often blending diaristic narratives with dark, dream-like whimsy. Autobiographical and absurd, their writing is alluring and uncomfortable. Both brutal and beautiful, bringing the audience into a shared space of healing and catharsis. They perform with a constantly changing electro-acoustic arrangement, always finding new ways to showcase an intimate horror. Most recently Holmes' released their music video "Nothing" via Paper Magazine. In 2019/20 they released a series of EP’s and Spring 2021 marks the release of their highly anticipated new LP “Nightmare In Paradise” on Ratskin Records.

Venturing to push the boundaries of her primarily synth-based work, SPELLLING took on the ambitious task of orchestrating and self-producing an album that features an ensemble of 31 collaborating musicians. The Turning Wheel incorporates a vast range of rich acoustic sounds that cast SPELLLING’s work into vibrant new dimensions. The double LP is split into two halves — “Above” and “Below.” Lush string quartet shimmer combines with haunting banjo and wandering bassoon leads, as the album progresses from the more jubilant, warm, and dreamy mood of the “Above” tracks to the more chilling and gothic tone of the “Below” tracks. This progression is anchored by SPELLLING’s familiar bewitching vocal style that emphasizes the theatrical and folkloric heart of her songwriting.

The release of The Turning Wheel was delayed by almost a year from its intended release date in September 2020 but the forced pause ended up serving as a blessing in disguise. Navigating the chaos of recording and producing the remaining instrumentalists – either remotely or through rigid socially distanced studio sessions – was immensely difficult, however the delays ultimately opened up the opportunity for SPELLLING to dedicate more attention to her lyrics. The Turning Wheel demonstrates a distinct evolution of lyrical style, from the more incantatory and abbreviated approach of her previous work to a more expansive, narrative production.

The Turning Wheel is a manifestation of this considerable effort, time, and collaborative energy and will surely become a classic for its elegance. And while the artist’s eclectic influences, from soul to psych to pop to noise, remain present, something entirely new has also been born in the cosmic soup of this massive undertaking: a grand and genreless adventure. One that allows the artist’s authenticity to shine and also marks her as a conduit for something with a magic of its own.

SPELLLING’s previous bodies of work have earned her critical acclaim. Her 2017 debut Pantheon of Me was Bandcamp’s #4 Album of the Year and they raved: “Cabral has it, from her careful sense of composition to her charismatic presence to her ability to communicate with her music straight through to the listener’s heart.” Her first release on Sacred Bones, the Hard to Please single, was named a Best Track by The Guardian, who said the song was “like Solange looking in a haunted mirror.” Her second full length Mazy Fly saw great support from the likes of Pitchfork (“it’s the sound of an artist’s vision sharpening, pointing outward.”), Stereogum (“It’s a gorgeous and evocative and provocative record, and it points to a future where Cabral could pretty much do anything.”), Paste (“too appealing to resist”) and once again found its place in The Best Albums of 2019 at Bandcamp.

Born in Bolton, UK, Planningtorock – aka. singer-songwriter, producer, composer and director Jam Rahuoja Rostron – has been using music as a mirror to learn more about themselves for the last seventeen years.

Jam uprooted to the Estonian capital – a beautiful and gentle-paced, cobble-stoned city on the Baltic coast - after spending two decades in Berlin. Already feeling restless and ready for a change, everything fell into place when the musician met their partner through mutual friends in Helsinki; soon, Jam relocated to Riinu’s home city full-time. Last September the couple married. LGBTQ+ marriage isn’t legal in Estonia, so the ceremony took place at the city’s British Embassy – in theory, the country recognises marriages which took place abroad. In reality they have been struggling to get their partnership acknowledged in their home country while under a right-wing coalition government. With the prime minister now ousted over an alleged corruption scandal, Estonia is going through a time of great political upheaval. Distant hope of a more progressive government is on the horizon – and ‘Gay Dreams Do Come True’ represents Planningtorock’s own personal exploration of queer love.

A loud, proud, unabashed celebration, Planningtorock’s new EP ‘Gay Dreams Do Come True’ stands in opposition to the tragic queer narratives which can sometimes dominate the mainstream, Jam set out to make a record which basks in the all-consuming joy of queer love instead, and the sense of belonging and safety that comes with it. “I feel there’s something very political about owning queer happiness,” Jam says, “cutting it out and saying: we have a right to be happy. I want to make quite blatantly gay music to take up space. I felt like I was gay-dreaming on the day Riinu and I got married! There were little birds and stars around my head,” they say, laughing. “I was really pinching myself.” Speaking further about the track, Jam says, “this song is a dedication to my love, my wife Riinu and to the Black trans women who fought for the rights we have today as queer, gay, non binary lesbians.”

Propelled by buoyant synthesised strings and house-inflected urgency, warmth and contentment pours out of ‘Girl You’ve Got My Heart’ as Planningtorock promises their devotion: “your love is good, so good for me,” they declare. There’s also a fire burning at the core of ‘Her Heart Is My Home’ – skittering beats bursting forth out of cinematic orchestration as a pitched-up Planningtorock sings of the sanctuary they have found in love. It’s the artist’s most personal release to date – inspired in part by the process of making 2018’s similarly exposing album ‘Powerhouse’. “When you open up to people and you share your painful experiences, people are like, ‘thank you, I’ve got a load of bags too!’” Jam says. “It’s a fantastic exchange, and it made me really grow in a way I couldn’t have grown without it. It released me, quite literally.”