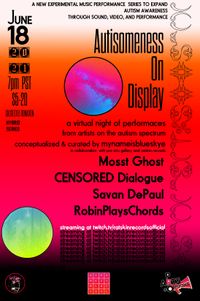 MYNAMEISBLUESKYE Presents AUTISOMENESS ON DISAPLAY: A Virtual Night Of Performances from Artists On the Autism Spectrum. Curated by mynameisblueskye FRIDAY JUNE 18TH, 2021. 7PM PDT. $5-20 suggested donation. Streaming at: twitch.tv/ratskinrecordsofficial Please follow and support all of the performing artists. <3*

---- CENSORED Dialogue ---- https://stkhm.bandcamp.com/ For the last 3 years, CENSORED dialogue has hidden their talents in the shadows. Instead of releasing solo music, the Texas artist has taken the backseat approach as they focused their efforts on building STKHM, an independent record label and creative umbrella. STKHM members Waylin Flaza, Chloe Hotline, Tmpest, and Chris Geezy inspired CENSORED to learn how to produce their own music using programs such as Ableton Live and Logic Pro. While glimpses of this new creative direction were shown in 2020’s “Self-Produced CENSORED” and 2021’s “DECEMBER,” CENSORED dialogue has yet to release a solo project…until now. While Afro Pessimist, CENSORED’s self-produced debut album, is a grave departure from their previous work, in their eyes it is “the kind of music [they’ve] always wanted to make.” An indication of the future of their career. ---- Savan DePaul ---- https://savandepaul.bandcamp.com/album/divine-ecdysis they/he/she bad apple commnue // tiergarten records + grimalkin records // sagan theory // magicicada for the creation of musical projects that take listeners on wild experimental journeys. every possible genre, ones this side of the galaxy and beyond, collide in one consciously charged package. revolutionary, sensuous, contemplative, vibrant

---- RobinPlaysChords ---- https://robinplayschords.bandcamp.com RobinPlaysChords album Teardrop Girl-Star LP finally saw the light of day in 2017, Robin Jax opened up. Support slots with the likes of Purple Pilgrims, Alabaster dePlume, Thomas Truax and Madonnatron, roles in multi-disciplinary shows by Spectra Arts Company and Room Art, singing in a choir alongside Wolfgang Buttress' BE Music (and 50,000 bees) in Coventry Cathedral, the launch of "transatlantic Autistic duo" The Companions with musician/author Amber Bird, founding the neurodiversity-focused record label Tiergarten Records and guest contributions to The Shining Tongues, the project of The Infinite Three's Dan Knowler - a relatively hyperactive burst of activity for someone whose studio debut took six years to complete. Robin has been interviewed by The Guardian relating to experiences of access for autistic people within the music industry, and is affiliated with Attitude is Everything's Next Stage artist programme.